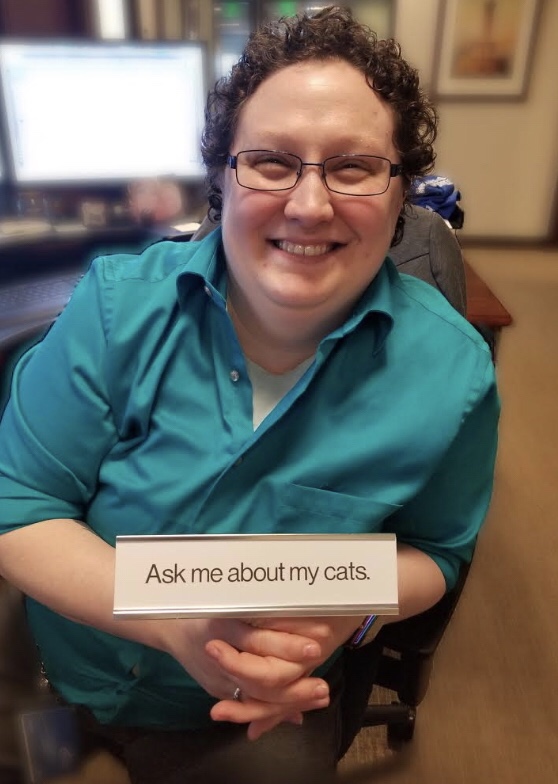 Stephanie Forner(She/Her) is a volunteer for Lambert House.

When you came out the first time, what made you feel safe to do so?

I came out a number of times, I’m not sure I ever truly equated coming out with safety. The first time I really came out to someone other than myself was to my closest friend. She was a relatively religious individual who I’d known since I was twelve. My friendship had always been a safe haven to me of sorts, I never really had a doubt that telling her would end badly. It didn’t. So ultimately, I think what made me feel safe to do so was finding someone who had always accepted me for me, and understanding that it was likely said person wouldn’t suddenly change after ten years. When I finally came out to my parents that was a different story, I refused to ever tell my family until I’d met someone I was sure I’d spend forever with. So in that case what made me feel safe was my girlfriend (now my spouse). She made me feel strong and independent and prepared to face whatever their reaction was.

How do you ally yourself with others who are a part of the LGBTQ+ community?

I’m not entirely sure the best way to answer this, perhaps because I don’t know exactly what it means. If it means how do I build friendships and relationships with LGBTQ+, the answer is honestly I don’t do it intentionally. Most of the LGBTQ+ I’ve met occurred naturally, since coming out to my friends and family I decided to be upfront and forthright about who I was, about my sexuality. I spoke about my relationship openly with my wife and in doing so I think I naturally found my way to others like me who wanted to also to wanted to do the same. I shared my life and I think the friendships and allies I’ve made along the way happened because I was honest and open.

How do you educate people about the LGBTQ+ community?

I think for me the most important aspect of education is making sure the person I’m educating WANTS to be educated. For example, while I’ve certainly attempted to educate my folks regarding LGBTQ+, at the end of the day their still uber conservatives who think people like me are going to a bad place. Now, for people who actually want to learn, I tell them the truth, I’m open and transparent about life as an LGBTQ+. I tell them what they want to know and always begin with ask whatever you want, because it’s more offensive when assumptions are made. I find that while I get a lot of “typical” questions (who’s the guy in the relationship), ultimately it all comes from a place of wanting to be better. In return I find situations where I can ask questions and learn in return, so I always try and keep it an open and active conversation.

How do you educate people about intersectionality in the LGBTQ+ community?

This is another situation where I’m brutally honest, unfortunately racism, transphobia and sexism still exist in even in the LGBTQ+ community, you see flamboyant young men who get picked on for being to feminine, butch lesbian who are too masculine. Ultimately when people ask about it, I do mention it’s part of a reality, we don’t have to like it, and I certainly don’t condone it, rather I try to encourage people to look at things from another perspective. There are so many cultures and backgrounds for us to appreciate and diversity already in our LGBTQ+, we should embrace our differences rather than judge or point them out.

What resources would you recommend for LGBTQ+ youth who have questions?

Using Lambert House in Seattle has opened my eyes up to how much is out there for youth, the Trevor Project is also wonderful, some states have great Stonewall resources.

What did you think your life was going to be like after high school?

Honestly I was so far in the closet in high school I assumed I’d marry a man, and have children because that’s what would keep my family happy. I never imagined that I could be happy with a woman, that I could have a family we create together. I wish someone had been there to coach me in high school and assure me that no matter what I felt it was going to be okay being who I was.

What tips would you have for people questioning their gender identity?

Trust your instincts, so many adults (including some who are LGBTQ+) struggle with the idea of gender being a scale, it’s easy to feel forced to be something you aren’t because others are uncomfortable. It’s normal to explore your gender, to explore your sexuality. If you don’t feel safe doing that at home then find a place where you can. For me it was in sports and college. It’s okay to want to learn more about yourself, to gender bend. Don’t let someone force you into discomfort because they’re uncomfortable, try and find a common ground.

What tips would you have for people questioning their sexual orientation?

Set boundaries for yourself, when I was young I always said I wouldn’t have sex until I was older, while my sexuality didn’t have anything to do with the physical act of sex, it allowed me to have a limit for myself at all times. There was a line and I wasn’t crossing it until I was confident I was ready. By setting those boundaries I was able to explore my sexuality, with men and women and ultimately figure myself out before I gave up a part of me I couldn’t get back.

How do you stay resilient in the face of negativity and stereotyping?

When  my wife and I were living in Ohio it was a lot tougher, we sort of just ignored the negativity and we had some fun with the stereotypes. You can’t use a stereotype against someone if they don’t see it as a negative. Coming out here to Washington opened our eyes to just how little support we had. We’ve worked to develop a community, allowed ourselves to feel connected to the LGBTQ+ community here and in turn we combat it by being supported.

What is your favorite piece of LGBTQ+ representation?

Queer Eye, the new version, I adore the Fab Five I want to give them all a hug and feed them a nice large dinner. I think my favorite part of this is that it’s based in the south which is exactly where LGBTQ+ need the support. Love it.

What are your hopes for the future of the LGBTQ+ community?

Is there any advice you would give to the LGBTQ+ teens of today?

It’s not always going to be like this, you won’t always feel unaccepted, you won’t always feel unsure and unconfident in yourself. Teenage years are so rough for so many reasons and you’ll hear it constantly, but it does get better. It really, really, really does. Find resources, make connections, find your community and start discovering yourself now. Keep fighting because every day you fight, is hopefully one day less than the next generation will have to fight for their rights and recognition.